Northern Beaches Mum Lorna recently tried out the new range of Babylove nappy pants and was so thrilled with them that she sent us this glowing review…
I have never been overly happy having my daughter in nappies.
Since birth we used a few different very well known brands, but found we had one issue after another….
They didn’t fit comfortably.
They would give her a rash.
They would end up halfway up her bottom after a couple of leg movements.
They would leave red marks.
They would irritate her bellybutton when she was sat up.
They would leak.
That’s when I saw an advert for Babylove nappy pants. 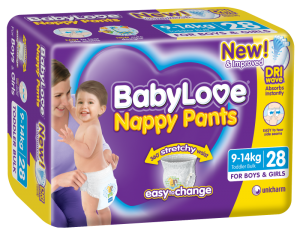 I spoke to a friend who basically asked me what rock I had been living under! It turned out she thought they were the best and neglected to tell me.
Anyway, to cut a long story short, we have been using them ever since.
I love the soft material used, the amount of elasticity around the legs and tummy, the level of absorption and the ease of use. My daughter is now 19 months old, and loves to take her “pants” off all by herself for bath time. It is giving her independence.
I was so happy. Then I found out Babylove have started producing wipes! Now I have only ever used one brand prior, and to be honest, I have always been satisfied with them. But saying that, I have found the new Babylove wipes to be all that I love in the other brand but a whole lot softer. So I am a convert and looking forward to them becoming widely available.
Thank you so much Babylove!