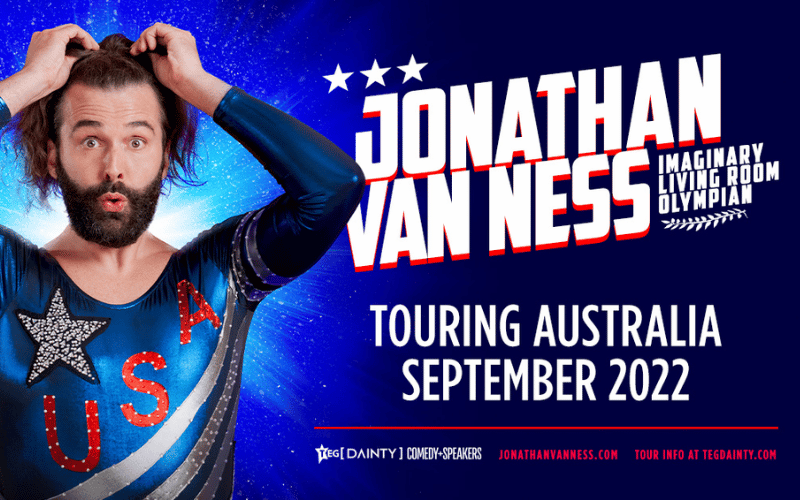 It follows Jonathan’s first worldwide comedy tour, Jonathan Van Ness: Road to Beijing, which saw him perform to sold-out crowds across the country.

“Australia is one of the most amazing places and I cannot wait to come back and share my new show with y’all! We’ve been through a lot the last couple of years and now it’s time to catch up and celebrate, queens!”

Prepare for a stunning night of COMEDY, with a side of self-expression, discovery, life lessons, and of course, a bedazzling gymnastics routine as Jonathan goes for comedy gold!

In Imaginary Living Room Olympian, Jonathan dives into his comedic prowess and tells the story of everything — the good, the bad, and don’t forget the sexy honey. With serious laughs, some stellar gymnastics, and gut busting joy, Jonathan shows it’s about the journey, not the destination. This stand-up comedy extravaganza is a high-octane night of comedy, community and sissying that walk!

Famed for his role on the Emmy Award-winning Netflix reboot series Queer Eye, where he shines as the hair guru and self-care advocate, Jonathan is passionate about using his platform and voice for change. An avid supporter of the LGBTQ+ community, he worked closely with Planned Parenthood and The Trevor Project on campaigns tied to the release of his book that focused on removing the shame and stigma that comes along with talking about sexual health, as well as the long-lasting effects of bullying and how to overcome it.

Jonathan’s first solo network series, Getting Curious with Jonathan Van Ness, for which he is both executive producer and host, is streaming now on Netflix.