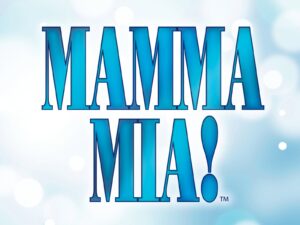 Gimme! Gimme! Gimme! a chance to review this for you! Here is a great review from Northern Beaches Mums Lauren Thomas…

The musical phenomenon Mamma Mia! has rocketed into the Capitol Theatre with this fabulous revival. Knowing me knowing you, you’re going to love this show mummies.

I was really lucky to be in the opening night audience  who gave the show a rapturous reception.

If you didn’t already know Mamma Mia! is the ABBA based musical about a daughter’s (Sophie) quest to discover the identity of her father on the eve of her wedding. Sophie brings back three men from her mother’s (Donna’s) past, Bill, Sam and Harry. Mamma Mia! manages to portray long term female friendships, and oozes compassion as well as focusing on the mother-daughter relationship. It has also been slightly rewritten to Australianise it.

This version is very slick and sleek, bright bold and colourful with a terrific cast who perform with incredible energy.

As a young Sophie Sheridan, Sarah Morrison is fabulous and there are some very moving scenes with her mother Donna. Natalie O’Donnell is the feisty single mum Donna is a petite dark firecracker, revealing Donna’s aggravation, courage and conviction.

Among the possible fathers in this production, Josef Ber as Bill Austin, Ian Stelnake as Sam Carmichael and Phillip Lowe (who wowed us in Bigfish last year) as Harry Bright are all excellent in their roles.

Stelnake as Sam, an architect, who originally designed Donna’s taverna, is engaging and genial, Harry is portrayed by Phillip Lowe as unconventional and sweet and Josef Ber portrays Bill as a rather perplexed travel writer and they all sing gloriously. It is rather easy to empathise with Donna’s predicament!

There is some very difficult and demanding choreography blending several dance styles with some sizzling moves intricately and precisely performed. (The Lay All Your Love on Me segment with the flippers and goggles is hilarious, Does Your Mother Know includes tango like moves for example.)

Jayde Westaby and Alicia Gardiner almost steal the show as Donna’s best friends (The Dynamos): the tall, foxy, sultry, glamorous Tanya and vibrant Rosie. Jayde has much fun as Tanya rebuffing Pepper (Sam Hooper) in Does Your Mother Know? Gardiner (from TV?? s Offspring) has great comic timing in Take A Chance on Me chasing Bill.

And if you’re a Dancing Queen there’s an opportunity at the end to get your Voulez-Vous on and have a boogie at the end.

So Northern beaches mummies, my lovely Chiquititas, Take a chance on me and head to the Capitol Theatre for a fun night out. It’s well worth the Money Money Money!!

Thank you for the Music!!