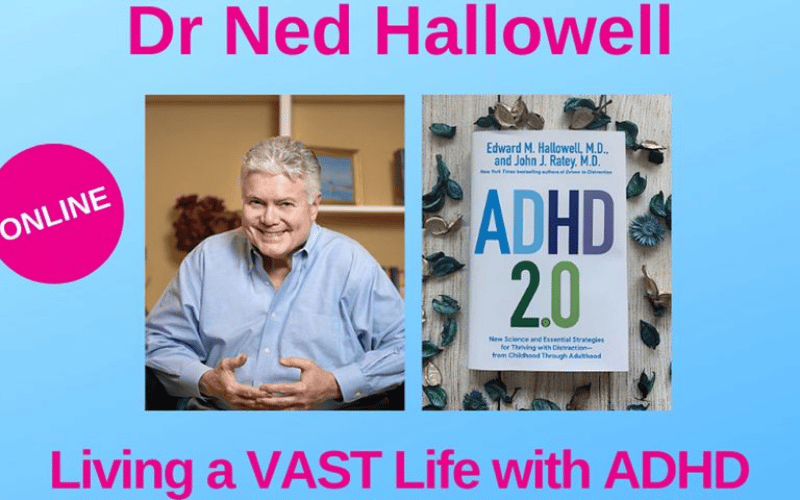 What if instead of thinking of ADHD as a deficit and a disorder, we saw it for what it really is, a way of being in the world which with the right support can be a wonderful way of being?

Drs Hallowell and Ratey introduced a new term for ADHD in their latest book ADHD 2.0. It’s VAST, or Variable Attention Stimulus Trait. The old term with its emphasis on pathology, on a “deficit disorder” is inaccurate and stigmatising. The new term is far more accurate, allowing for positive attributes, not just negative ones.

Dr Hallowell explains the rich and complex world of VAST and how a simple change in framing can set off an entire shift in thinking and treatment.

Edward (Ned) Hallowell, MD is a board-certified child and adult psychiatrist and world authority on ADHD. He is a graduate of Harvard College and Tulane Medical School, and was a Harvard Medical School faculty member for 21 years. He is the Founder of The Hallowell ADHD Centers in Boston MetroWest, New York City, San Francisco, Palo Alto and Seattle.

He has spent the past four decades helping thousands of adults and children live happy and productive lives through his strength-based approach to neurodiversity, and has ADHD and dyslexia himself.

Dr Hallowell is a New York Times best selling author and has written 20 books on multiple psychological topics. The groundbreaking Distraction series, which began with Driven to Distraction, co-authored with Dr John Ratey in 1994, sparked a revolution in understanding of ADHD. He is also a sought-after international speaker and has presented to thousands on topics including the strengths of ADHD, strategies on handling fast-paced life, parenting and a range of other pertinent family and health issues.